What Influence is Undue? 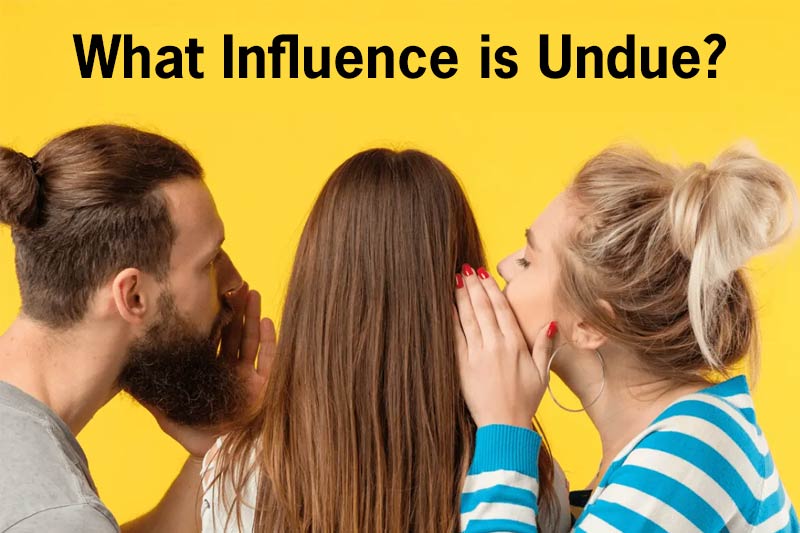 Undue Influence Elements
The elements of undue influence are: (1) the existence and exertion of an influence: (2) that subverted or overpowered the mind of the testator at the time of execution of the instrument; and (3) so that the testator executed an instrument he or she would not otherwise have executed but for the influence. Rothermel v. Duncan, 369 S.W.2d 917, 922 (Tex. 1963). The burden of proof is on the person contesting the instrument.

Factors Showing Influence
The Rothermel court also noted numerous factors to analyze in determining undue influence, including the relationship between the testator and the party exercising the influence, the opportunities for exertion or deception, the circumstances surrounding the drafting and execution of the instrument, and the existence of a fraudulent motive. To determine whether the testator’s free will was overcome, the testator’s mental and physical incapacity to resist are examined, including whether the testator was physically or mentally debilitated.

Appeals Cases Affirming Undue Influence
In Cooper v. Cochran, a grandson told his grandmother that, if she did not sign the papers to create the trust that the grandson wanted, he would see to it that she “would never see the light of day” and that he would “put her in an insane asylum.” These facts, coupled with the fact that the grandmother was elderly, living alone, and needed assistance, was sufficient evidence to support the trial court’s finding of undue influence. Cooper v. Cochran, 288 S.W.3d 522 (Tex.App.-Dallas 2009, no pet. h.).

The In Re Estate of Reno case involved a daughter who isolated her 80 year old mother away from other family members, and then had the mother execute a will that was completely prepared by the daughter and which left all of the mother’s estate to the daughter (despite the fact that the prior will included the mother’s other children, her 13 grandchildren, and several charities, and several charities). The mother was suffering from occasional episodes of mental disorientation and confusion and was receiving hospice care in a nursing home. The appeals court found that the evidence supported the trial court’s finding of undue influence. In Re Estate of Reno, No. 06-09-00040-V (Tex.App.-Texarkana 2009, no pet. h.).

Summary
Most evidence showing undue influence is circumstantial rather than direct. Despite this fact, jury findings of undue influence are difficult to reverse on appeal.